Joseph procured a permit for me for Wednesday, to enter the Impenetrable Forest from Rushaga to see the Nkuringo gorilla group. Unfortunately, Karel was having some foot trouble and wouldn’t be able to join me. Nick helped with the arrangements, including a packed lunch and a bota driver for the chilly (temps in the low 40s F, with high humidity), 40-minute drive to the park station. We were off well before sunrise.

I was glad to be bundled in every shred of warm clothing I had, including a down-filled sweater and a wind-breaker, as the little motor bike climbed up and up through morning mist. The scenery was spectacular, even though the Virunga chain of volcanoes, just a stone’s throw across the border, were hidden in the perpetual haze.

We arrived in plenty of time for the mandatory orientation at the park ranger’s office, where I met the other eight tourists who would be my trekking group. The sun was peeking through the mountains by then, and the air was warming quickly. I stuffed my warm clothes into my camera bag and hired a porter. It can be very difficult, psychologically, for a liberal-minded American to employ servants. We’ve been taught self-sufficiency and equality all our lives—regardless of whatever impression might be created by recent news coverage of racists and nationalists who are feeling validated by certain politicians. However, in a place like rural Africa, this is how a tourist can do some good, by supporting an ordinary person who has nothing but his strong legs and back with which to make a living for him and his family.

Also, I had just learned I was about to embark on “the toughest trek in Uganda.” The Nkuringo Group was notoriously the furthest and most difficult group to reach. Don’t worry, our guides assured us. If anyone couldn’t make it, they could always resort to the “African helicopter,” i.e., a litter carried on the shoulders of four strong men. “It happens every year. You won’t be the first, you won’t be the last.”

It started off easy enough, with a long, gentle decline in the relatively cool air of early morning. Besides the eight other tourists we had an entourage of four or five porters, a park ranger, and several armed guards. They were there, we were told, in case we encountered any forest elephants, although most of us were aware that there had been an incident in 1999 in which armed rebels from Rwanda had killed a group of tourists. The ranger distracted us with stories about the elephants that had gone into the forest attracted by delectable fruits one season, only to find themselves cut off from the lowlands a few months later by the ever-expanding farms, settlements, and roads that were springing up around the newly formed park. The elephants decided to stay and had adapted in numerous ways to life in the mountains, including traveling quickly downhill by sitting and sliding on their bums. That was something, we all declared, that we’d really like to see.

The trail got steeper and the air got warmer. We weren’t actually in the park yet, but in the wide fringe of farms and deforested slopes that surround it. The sun beat down, until the ground was steaming.

The farms were a problem, because the gorillas, who require a highly varied diet of vegetables, often like the same foods as humans. The ripening crops were often enough to entice the gorillas to leave the cover of the forest to raid the gardens. As we paused on a ridge, we found ourselves overlooking a tea farm forming a 200-meter border along the edge of the forest. Gorillas, it had been discovered, don’t like tea. The bushes formed an effective fence between the forest and the farms.

Baboons were another story. When the park was created, the Batwa pygmies were kicked out of the forest. That is a whole other humanitarian catastrophe that I don’t know enough about to try to describe, but one of the consequences was that the apex predator was removed from the ecosystem. The baboon population has exploded, and they are a major pest to farmers. The solution, as far as the farmers are concerned, is to cut down the forest that shelters the baboons. Just one more source of pressure on this precarious environment.

On the ridge, the ranger gets the news on his radio. The trackers have found our gorillas. We continue down and down.

At last, we enter the jungle. The air is so humid, my lungs begin to ache. We finally stop in deep shade. The gorillas are close. We’re instructed to leave everything except our cameras in the care of the porters, and reminded that we must stay at least 20 feet away from the gorillas. In the unlikely event that we’re charged, we should stand close together in a group and hold our ground. The guides might shout an order to crouch, but if not, keep standing. Ready? Let’s go.

Now we’re climbing. Straight. Up. It’s a wall of mud, covered with a slick of wet leaves. If it weren’t for the thicket of slender trunks to hang onto and use as footholds, there’s no way we could get up here. And then, suddenly, the ground levels out a bit, and there’s an opening in the canopy. The guides motion for quiet. We hold our breath and realize we’re surrounded. Surrounded! There are gorillas, invisible, all around us.

I see a flash of movement just beyond the leafy fringe that surrounds the clearing. “One of the silverbacks,” a tracker tells us, speaking softly. “Not the lead. Look!” He points to my left, just as a huge male emerges from the shadows and saunters by, close enough to touch. Right behind him, an adult female. Next, an adolescent female. Then a two-year-old, who pauses and looks at me curiously. Then a one-year-old. It’s all happening so fast, I barely manage to turn the camera on, much less adjust the settings and focus. I just hit the button repeatedly and hope for the best. 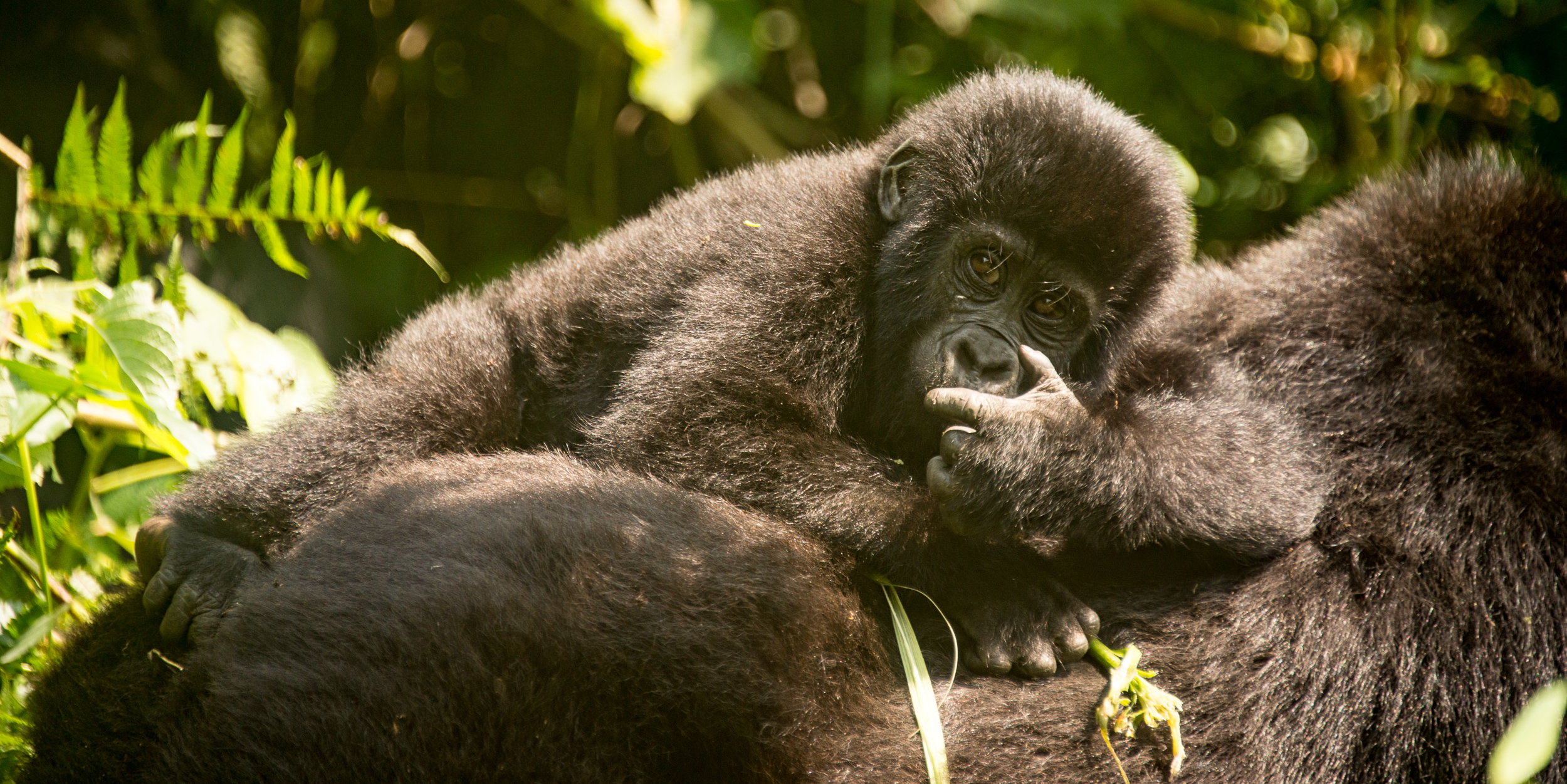 The five gorillas make their way to the next little clearing on the ledge, and the guides motion for us to follow. The ground is slippery and it slopes toward the cliff we just climbed, but we manage. The gorillas are settling in at one end, so we do the same a scant 20 feet away. I raise my camera again, and that’s when I notice a problem. The image in the viewfinder seems washed out in the middle, and I’m having trouble with the focus. It’s getting worse. I tear my eyes away from the gorillas and look at the lens, and that’s when I see a cloud of condensation blooming inside the lens. Disaster!

It occurs to me that a 40-minute trip in the cold morning, followed by a 50-degree spike in temperature and near 100% humidity might present some challenges for my equipment. Luckily, I had back-up. I set the fancy Nikon D800 carefully in a spot of sunlight, hoping that warming it would allow the condensate to vaporize and escape. Then I whip out the good ol’ Sony and quickly snap a few pictures.

One of those shots turned out to be very lucky. The silverback paused in the light and turned for just a moment to look us over. I’m no expert at reading gorilla expressions, but he seemed to me to be relaxed, tolerant, maybe even a little amused. A moment later he turned away and found a comfortable spot to sit and eat. For the rest of the short time we had with the gorillas, the silverback was in deep shade, behind leaves, and had his back to us (his way of telling us that he wasn’t going to attack), but I got my one good photo.

Photography in this setting was a huge challenge. The light goes from blazing to blackness and back again in the space of a few inches. The gorillas are black, the hardest color to photograph in high-contrast light. It was midday—the long trek means you can’t be there during the golden hour—so light and colors are at their worst. The five gorillas had kindly arranged themselves at the edge of a clearing, which was great, but they were still mostly obscured by leaves. We could hear the rest of the group—at least seven more, maybe as many as twelve—all around us, practically breathing on us, but they were completely invisible in the thick brush. The responsibility of getting a few decent pictures weighed on me, too, because this was such an amazing experience, but Karel couldn’t be here.

And, so what? My biggest challenge was actually keeping my hands steady enough to take a photo, because my heart was pounding so hard I thought it might burst out of my chest. These huge, rare, powerful animals were so close. We were also lucky that today there happened to be a diverse family group, including its two youngest members, hanging out together with the dominant male (the members of a group usually rotate, so on another day it might have been the silverback and two or three mature females, for example). The two babies played, ate, and napped. We watched in amazement as the sub-adult female (six years old) watched over the two little ones like the world’s best babysitter, tickling and kissing them, helping them find tasty shoots, watching them as they climbed trees. The trackers, speaking softly, said the young female is sister to one of the youngsters, but adores them both; the three of them are inseparable.

After some rambunctious play the little ones settled down for a nap, so I took advantage of the lull to switch back to the D800. I was relieved to see that the condensation inside the lens had disappeared, and everything was working fine. All the other difficulties were still in play, including a tendency to start sliding downhill on the slippery ground. I didn’t care; I could have stayed there all day.

I was just about to try to figure out how to capture some of the other details of this incredible experience—for example, the clearing was full of little white butterflies, there were clouds of them following the gorillas—when the ranger announced that it was time to go. In fact, past time; we’d been with the gorillas for an hour and twenty minutes. I couldn’t believe how fast the time had gone by. 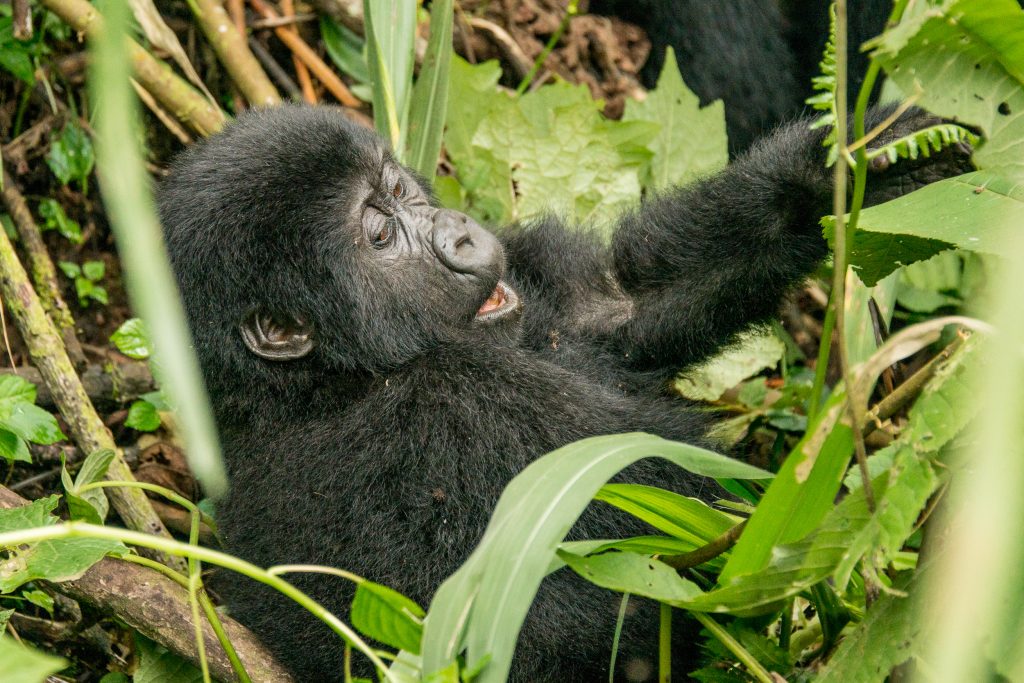 We regrouped on the trail. Everyone was smiling ear to ear. Encounters like this were why the Nkuringo group was the best, the ranger declared, and the trackers all nodded heartily in agreement. The lead silverback of this group doesn’t have insecurity issues. That makes him highly tolerant of tourists. He has two non-dominant silverbacks in his group, which is unusual, and yet there is little conflict among them; all the members seem devoted to their leader. He’s very gentle with the females and the babies. All in all, an exemplary leader, and a fantastic experience.