Somehow, Vienna and most of its architectural and artistic treasures escaped widespread destruction during WWII, and then managed to be west of the iron curtain. As a result, it still looks and feels like the seat of an empire. We had only a day and a half to see the sights of this great city, so we gave ourselves over to the tourist trail and selected the four or five activities that were our highest priority. There was some kind of religious holiday going on (of course), which had some of the main attractions shut down, but there was still plenty to choose from.


First we went with our group on a walking tour of the center of the old city, guided by a local historian. We made sure to hit the first of two culinary monuments: Figlmüller’s, which is famous for its plate-sized portions of tender schnitzel. We tried Radler—a sort of lemon-flavored beer spritzer—while we were there, which turned out to be an epic discovery and new favorite, second only to pear and apple hard ciders. (I see all our beer-snob friends cringing out there. Well, to each his own.)


Next, we figured out how to get to one of the many historic concert halls, where we enjoyed an evening of live music by Strauss, Mozart, and other composers who lived here when Vienna was at the pinnacle of European culture.


In the morning, it was off to the Spanish Riding School for a special treat for me. This is where the famous white Lipizzan stallions are schooled in the high art of dressage. It’s a tradition that dates back to the time when horses were used in battle. The horses were just back from their summer break in the country, so the full shows hadn’t resumed, but we were able to attend the morning exercises and watch the horses being trained and rehearsed in their maneuvers, to the accompaniment of classical music. We had clicked just a few photos when an announcer informed the audience that filming and photography weren’t allowed.

When I was a little girl I read stories of the great Lipizzan horses, but I never dreamed I’d get to see them in person! 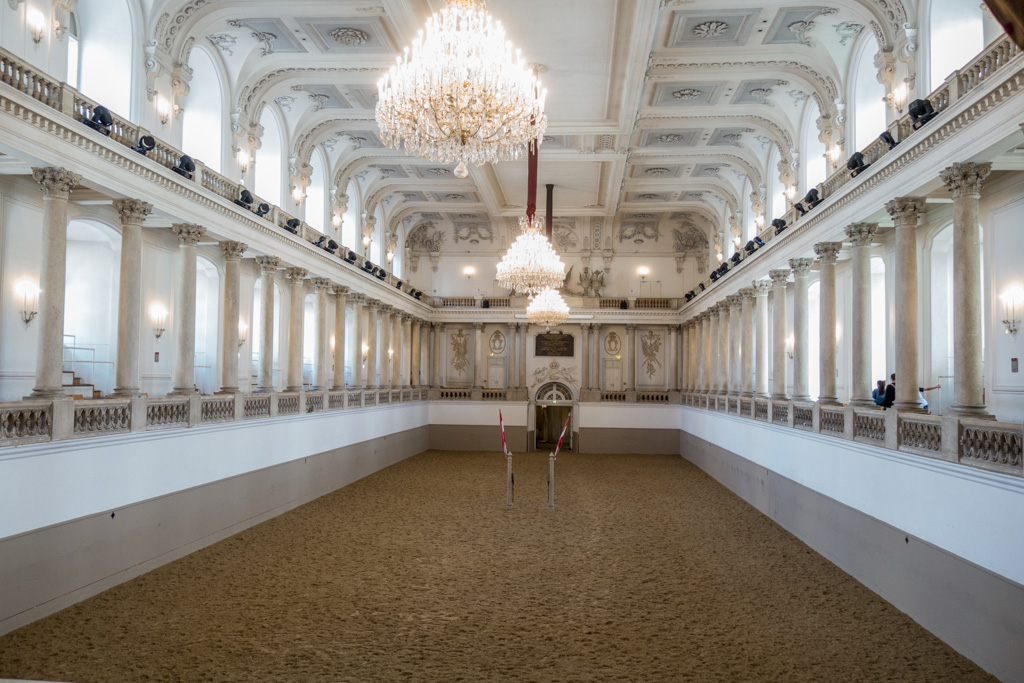 Moving on, we stopped for a break at the Hotel Sacher, home of the original Sacher torte. The recipe for this delicious treat is a closely guarded secret and is said to include three types of chocolate that are produced exclusively for the hotel. That won’t stop me from trying to figure out how to make some approximation of it when I get back home. It’s very similar in flavor and texture to the petit fours I make at Christmastime.

We had most of an afternoon, then, to spend at one of the museums. After a little research, we elected the Kunsthistorisches Museum (Museum of Fine Art). We further narrowed it down to one floor of a single wing, rather than try to take in all there was to see. That turned out to be a great decision, as we feasted our eyes on an incredible collection of Dutch, Flemish, and German masterpieces from the Habsburg collections. The paintings were in astonishingly good condition, with clean, bright colors and adequate lighting. The building itself, which had been specially designed to house the collections, was, itself, a work of art and beauty unlike anything we’d seen. When we couldn’t walk around anymore, we had a light meal in the café just so we could enjoy the baroque splendor of the room.

We polished off our day with dinner at a Greek restaurant just a block from our hotel. The proprietor was friendly and charming (and possibly even Greek!), the unique décor included Mycenean-style murals done by (I think he said) his daughter, and the food was delicious and reasonably priced. A happy ending to a very good, whirlwind visit to this great city.