When we were in Thailand last year on our honeymoon, visiting a floating market, I spotted a totally useless souvenir that I loved: a string of elephants carved out of coconuts, with feather propellers for tails, spinning in the breeze. We still had many weeks of traveling ahead of us, and they were silly and frivolous, so I didn’t buy any. If I really wanted them, if I kept thinking about them, I’d surely see them somewhere else along the way, and I could buy them then.

Well, I did think of them again, but never saw them anywhere. When we returned home in May, I thought how fun it would have been to see them spinning in the wind on our balcony. It was quite a while before I completely forgot about them.

While we were traveling on the Göta canal, the Juno let us off to stretch our legs in the one and only touristy town we saw on the entire journey. We were heading back to the boat, but had a little extra time to kill, so I decided to wander through a little market set up near the docks. The very first shop I encountered was not Swedish at all, but Thai. Sawadee ka! The Thai woman running the place told me she had immigrated to Sweden just a few years before, but she was already complaining about the hot, muggy weather (believe me, it was downright chilly compared to Thailand). And wonder of wonders, there were the flying elephants, carved from coconuts.

I called Karel over for a consultation. We had room in our luggage, and the price was great, hardly any different than what I would have paid in Thailand. So, should I be practical and get the single elephant (and pig, I had to have a flying pig), or the string with several on each? And Karel (he’s so wise!) replied, “Well, don’t those animals usually fly in flocks?” Of course they do. 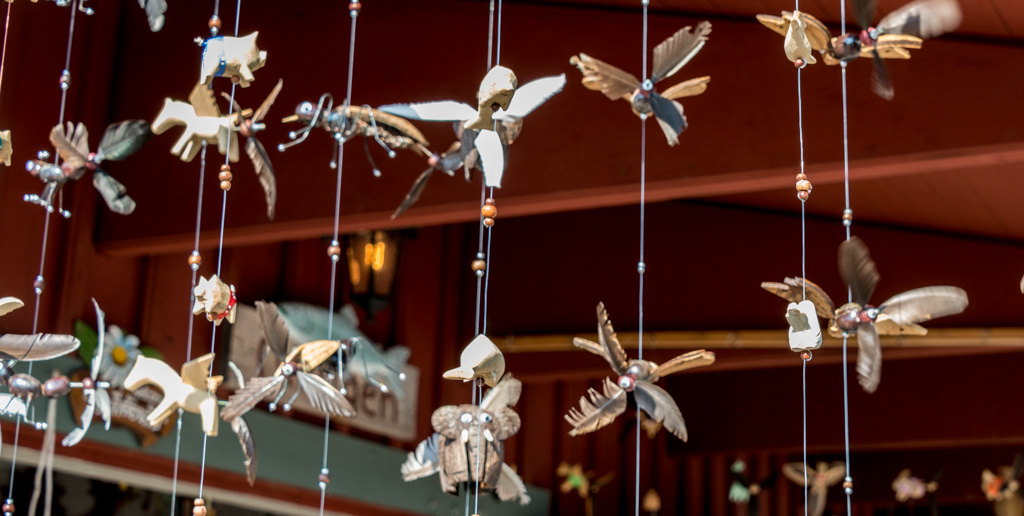 One thought on “Souvenirs”