Where The Vikings Went

Our honeymoon has taken us to some marvelous and exotic destinations, but not off the beaten track. The name, Iceland, however, still has a ring of wildness to it, a cold, lonely outpost at the bitter edge of the known world.

The strange thing is, though, that in these days of air travel, Iceland is on the way to everywhere. If you want to get from the US to virtually any destination in Europe or Asia north of the equator, or back the other way, you’ll be flying past Iceland.

So, why not stop? As we discovered when we made our travel plans, Iceland Air offers good, convenient service from Denver to the major cities of Europe at a reasonable price.

During the ‘90s, Iceland experienced an economic boom related mainly to its position in time, a few hours between the securities exchanges in Europe and the eastern US. The island has some of the best geothermal resources on the planet, so it’s a great place to operate vast banks of internet servers for handling millions of financial transactions every day. While the markets climbed higher and higher, Iceland transformed the old US military base into a comfortable, modern airport and adorned its largest city, Reykjavik, with hotels, restaurants, museums, and galleries.

We arrived in early May. The north of Iceland was still in the grip of winter. The snow was gone from the south, but it was still cool and windy and the grass was just barely showing some green. After four months of sunshine, warmth, and humidity, it was hard to adjust to this radically different climate.

The people are also quite different from those we encountered throughout the south. I’m making big generalizations, of course, but Icelanders are far more quiet and reserved than the Vietnamese (although they do show signs of having a sense of humor). Where Bali and Thailand were a riot of color, the Iceland aesthetic was stark and somber. In contrast to the lavish art and decor of Rome, the buildings and rooms of Reykjavik are plain, but designed with extreme care; they are just so. Everything has an aura of costliness, but of earning its place through perfect efficiency and functionality. For example, there are few trees in Iceland. Anything made of wood, therefore, is exquisitely beautiful and a prominent feature of the room. In Italy they show off with gold leaf and marble; in Iceland, with wood.

The one thing they have in abundance in Iceland is volcanic rock. Everything is built and paved with this heavily textured rock, in every shade of gray.

Our hotel was right downtown, so I did a little bit of exploring. I had a notion that it would be nice to take home a couple of Icelandic sweaters as souvenirs, and that, meanwhile, they’d be nice to wear in the bitter wind that was blowing off the bay. But the selection simply wasn’t what I’d hoped for. The shop windows were full of the optimism of spring, however: skimpy dresses and resort-wear, and lots and lots and lots of ki-i-inky shoes. As I wandered the volcano-forged city, tightening all the zippers and cuffs of my jacket against the cold wind, I found myself bewildered by the merchandise, wondering how these tough Vikings/farmers spend their free time, and what they imagine tourists would like to buy.

I found a nice, soft, fleece hat, and I was glad to have it over the next few days.

Food is mostly imported, and therefore, expensive, but it was of good quality and the local produce —lamb and seafood— are excellent. We spent a cozy night in a nice room with a comfortable bed and geothermal heat. In the morning we picked up our rental car and set off for a few days of scenic driving.

Our route was through farmlands and pastures along the southern coast. The land was rocky, treeless, very sparsely dotted with houses, sheep, and ponies. We followed along a mountain range with small peaks that were beautiful and wild-looking. We stopped at historic sites — with their appalling stories of struggle and conflict among the early Viking settlers — big, impressive waterfalls, mud volcanoes, and geysers. 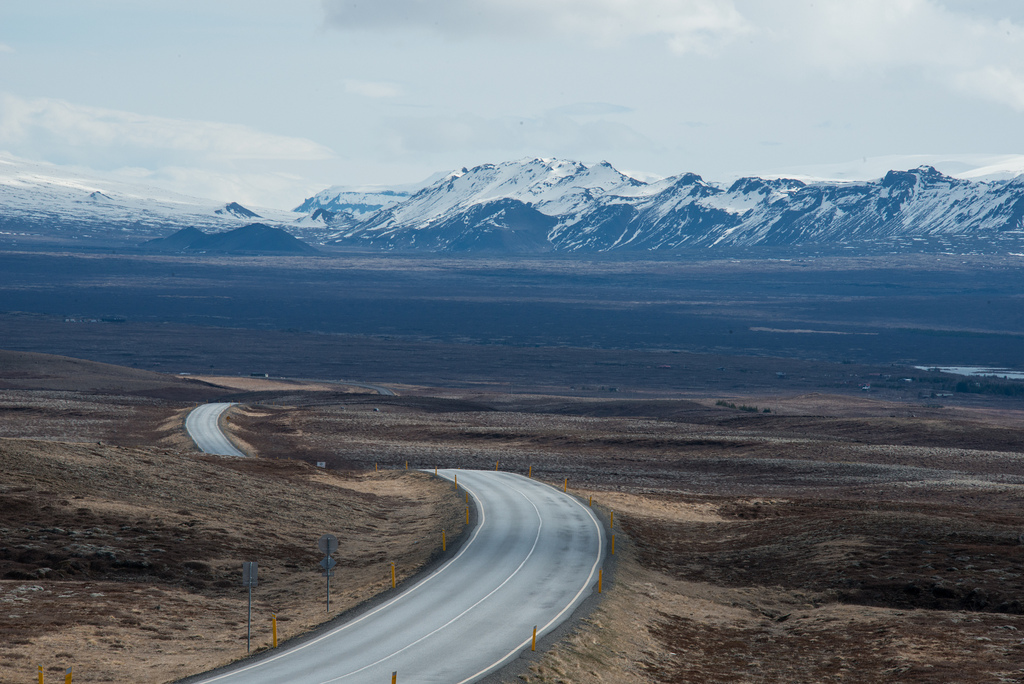 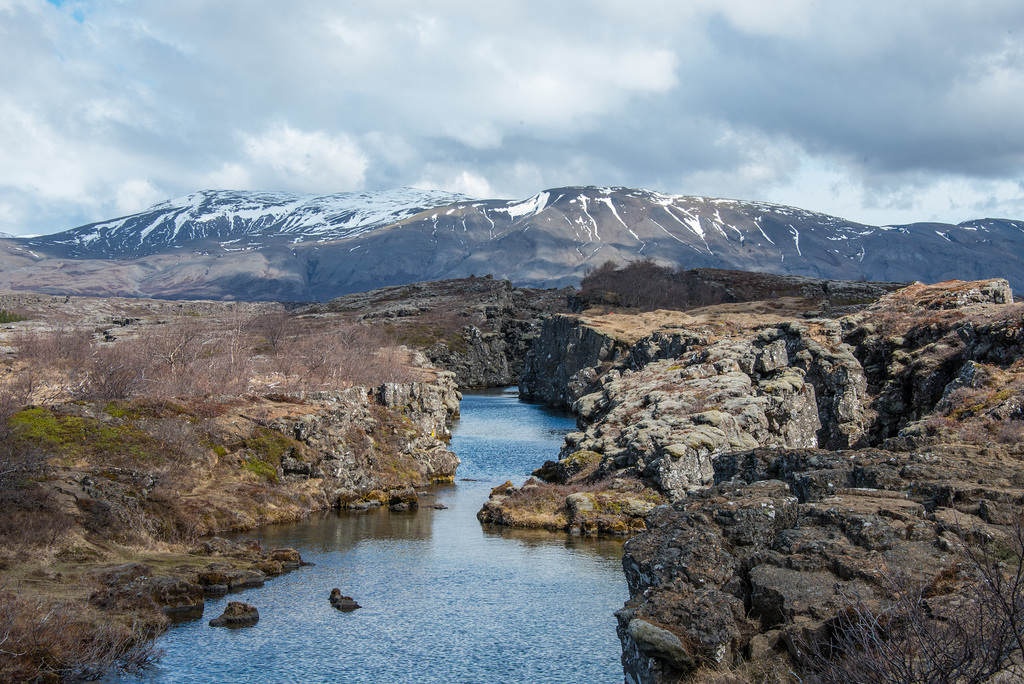 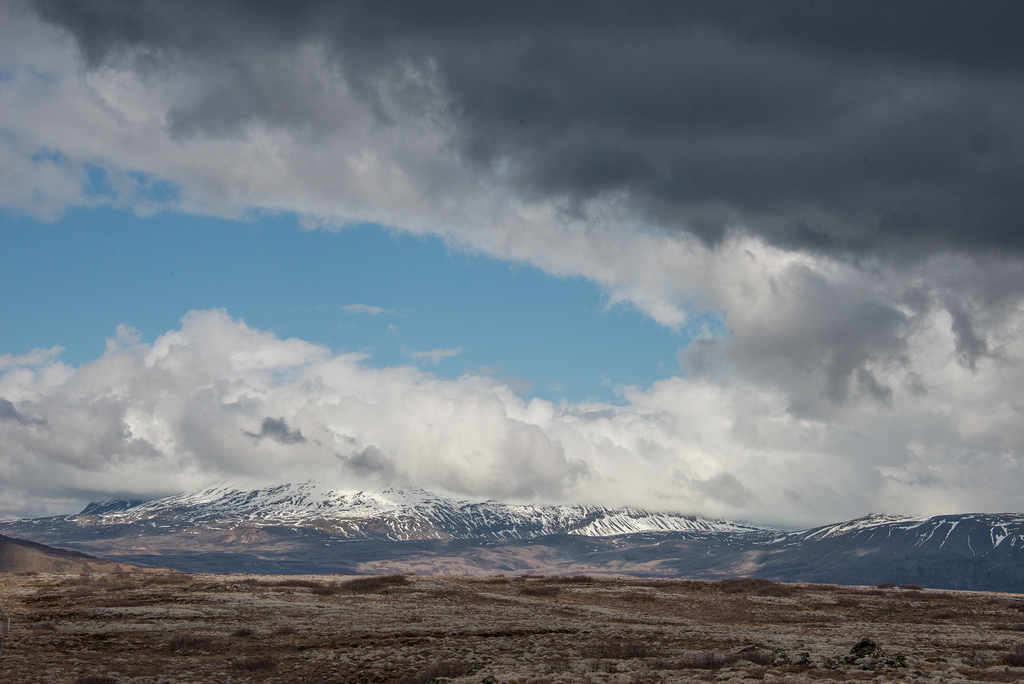 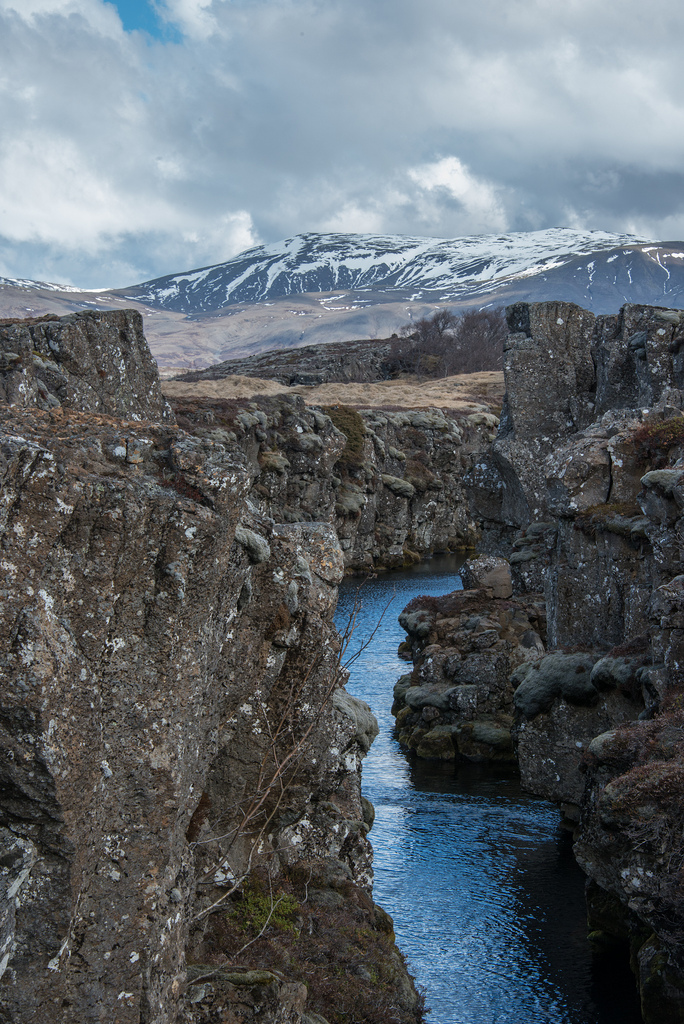 The biggest challenge was finding food. We were on the very early shoulder of the tourist season, and many of the restaurants and roadhouses that the tour company had suggested weren’t open. Also, Icelandic buildings defy you to find the entrance. In contrast to Italy and Greece, where the doors are flung wide and they’ll welcome and feed you even if they’re closed, or Egypt, Indochina, or Indonesia, where restaurants have no walls, we found ourselves walking around and around blank-walled structures with little or no signs, nor signs of life, trying to figure out if it was a restaurant or an abandoned storage shed.

When we managed to find a grocery store, I stocked up on some snacks. At least we wouldn’t starve while searching for lunch. We also learned to look for the tour buses. There weren’t many of them, but if one was pulled up at a roadhouse, it was a good bet that the restaurant would be open for business for at least the next half hour — but don’t procrastinate.

The last few miles at the far reach of our three-day loop took us down to the sea, to cliffs overlooking a stunning beach of black sand and white, frothy surf. 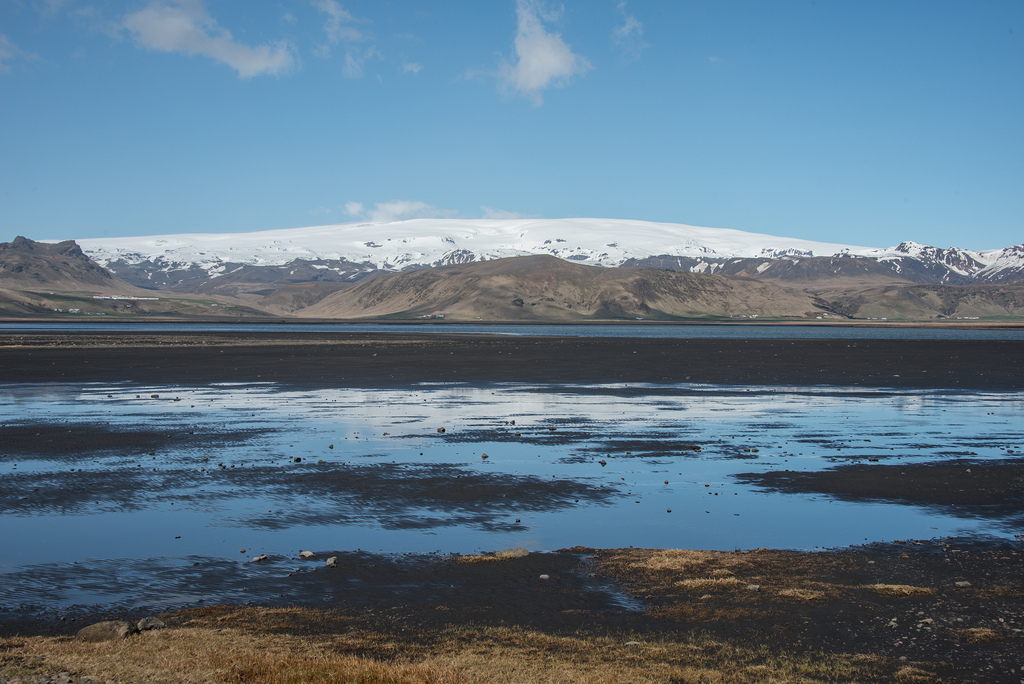 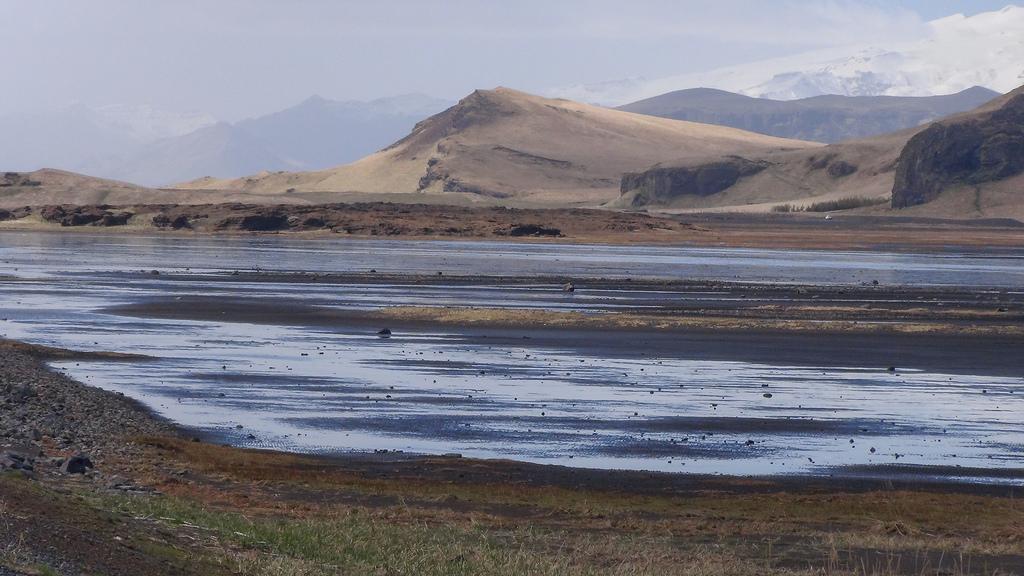 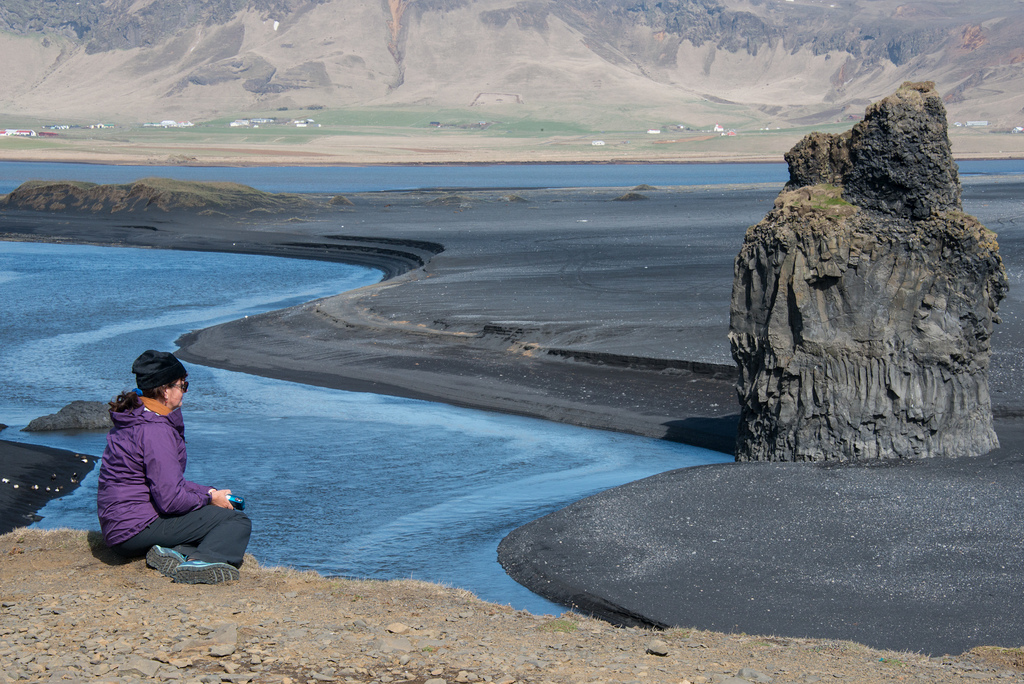 We stayed close to the water on our return drive to Reykjavik, and stopped at the Blue Lagoon thermal pools.

Our honeymoon has taken me to places and cultures that were completely unknown to me, and I’d discovered that a few days of experience and learning could completely transform my perceptions of the arts and crafts that I found in the local markets. When the objects are imbued with meaning, they take on a life and a beauty that I find so appealing. With that in mind, I turned a fresh eye on the shops of Reykjavik. The artwork I saw, inspired by the rugged and otherworldly beauty of the landscape, was also beautiful and compelling — but it evoked such loneliness, it made me shiver. And I just don’t need kinky shoes.

Perhaps another time. Karel and I got along so fabulously for all these months of travel, that we will surely be doing some more. And Iceland will be our way-stop for future trips to Europe and other points. I’d like to see it all in green, and maybe all in white.