The World Decides To Amaze Us Even More

Jaa’s hometown of Trang is only a couple of hours by public bus from Railay. Her family still has a house in town, where we stayed for a few days to visit her rubber plantation and explore some of the nearby beaches.

Karel was keen on finding a music jam. We succeeded when we found a band (actually, two bands, one acoustic and one plugged in, with some overlapping musicians) playing at a pub and willing to let us play along.

In the morning, Kelvin and Jaa were eager to take us to one of their favorite restaurants. The proprietor, whom they knew, wasn’t there, but Kelvin spotted a man who must be his brother, struck up a conversation, and learned that the owner, who was indeed the man’s brother, was attending a special celebration at the temple.

Perhaps it was because Jimmy recognized Kelvin and Jaa as regular customers. Perhaps it was because Jaa is a sort of prodigal daughter of Trang, from a well-liked family. Or maybe it was the hope of getting some good pictures off the big, fancy camera that Karel had unaccountably decided to bring to breakfast. For whatever reason, Jimmy invited us all to the temple to witness a rare ceremony, but we had to leave right away. We abandoned our unfinished breakfast and followed him to a Chinese Buddhist temple near the edge of town.

I wasn’t sure what was going on, but it was clear that a bunch of people were mustering for a big procession. Also, there were several young men and women who were working themselves into an altered state by doing a shaking dance. I was told that these people would be embodying dieties for the ceremonies. One of them would be a medium for the chief god of the temple. Normally, outsiders would not be permitted to see these preparations, but because this was a small temple, we were being granted special access.

Karel and I had surmised that the participants would be very happy to have some photographs and videos, so we kept our cameras going. Suddenly, the mediums were ready. They donned special robes with the help of assistants, and emerged to begin the procession.

Meanwhile, we were introduced to a V.I.P., a member or friend of the temple who, I later learned, was the brother of the former prime minister of Thailand. He helped us out by telling us when to kneel for a blessing, stand here, photo there, etc. He explained that, while in their altered state, the monks did not directly see, hear, smell, or feel what was going on around them.

Next thing I knew, Jimmy was pressing T-shirts, sashes, and neckerchiefs into our hands. After we donned them, he reappeared with scarlet sashes. That’s when we understood that we were to be guests of honor in the parade — which was ready to go! To get to our positions, we jumped onto the backs of motorbikes (check off yet another mode of transport) and were deposited at the front of a river of red and white banners. The prime minister’s brother waved me into place in front of him, between two standard-bearers (Mew and Aoy). Jaa was in row two, just ahead of me; Kelvin was pulled into the front row, just behind the leading vehicles. And off we went. Karel was not in sight, but he appeared later and joined me in row three. 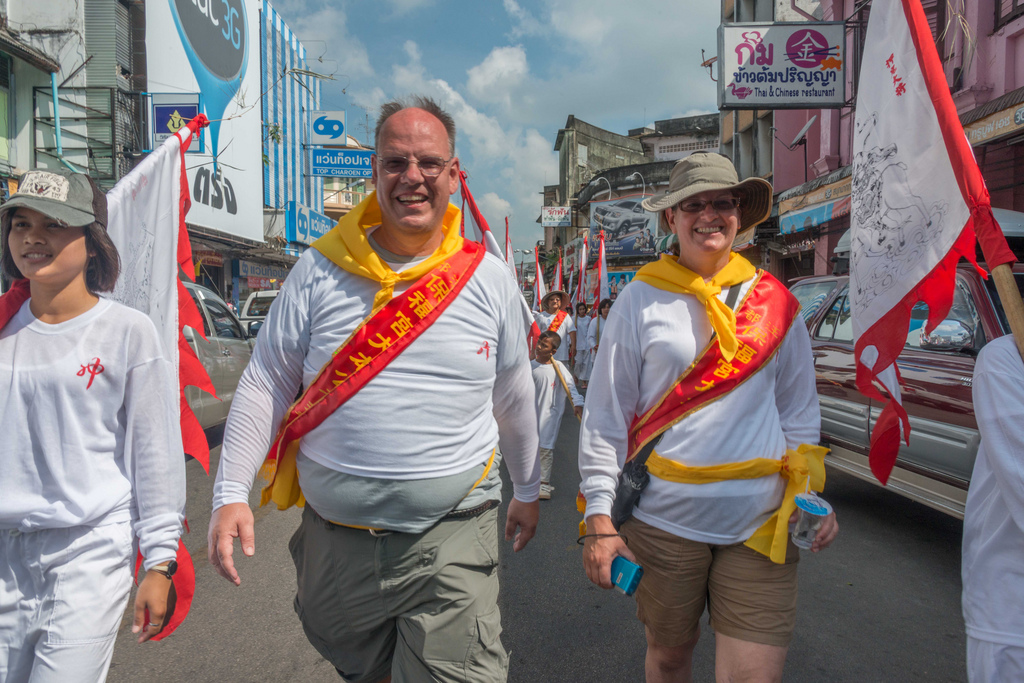 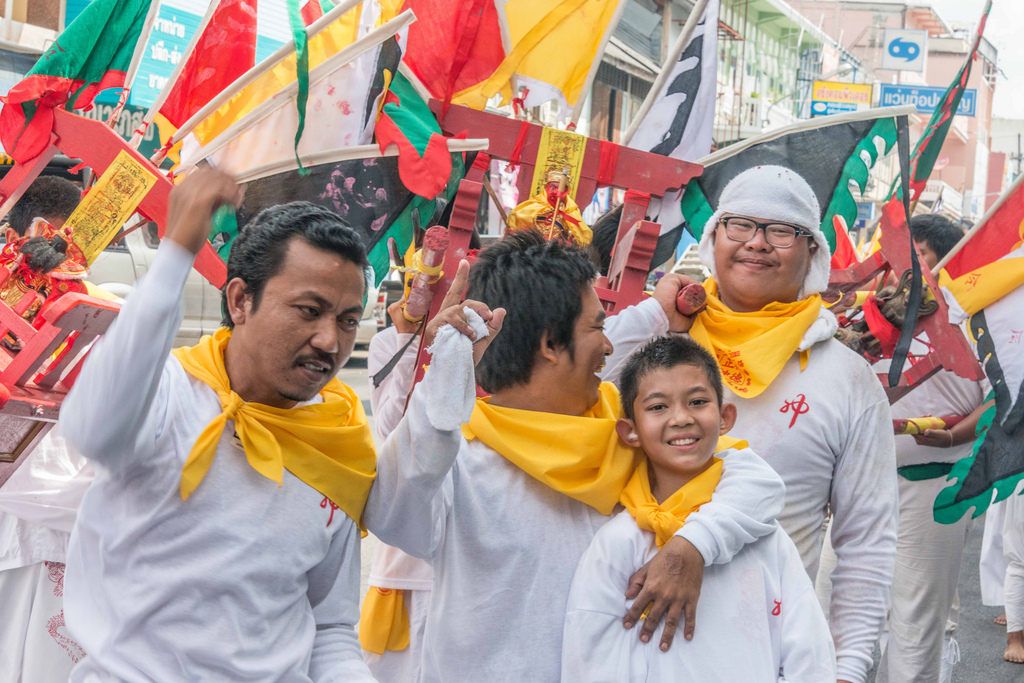 The parade wound through the main streets of Trang and lasted for over two hours. Sometimes, I heard firecrackers from the back of the line. Later, I learned that the temple was celebrating the “birthday” of their chief diety. The god is invited to occupy the body of a medium, and other dieties are also invited to partake in the celebration, which spans four days. The noisy firecrackers, which are exploded while suspended over a palanquin carrying a carved image of the god, alert the dieties that a follower is seeking their blessing for their family and home or business. When the fireworks are done, the embodied dieties enter the house and bless the space and occupants. 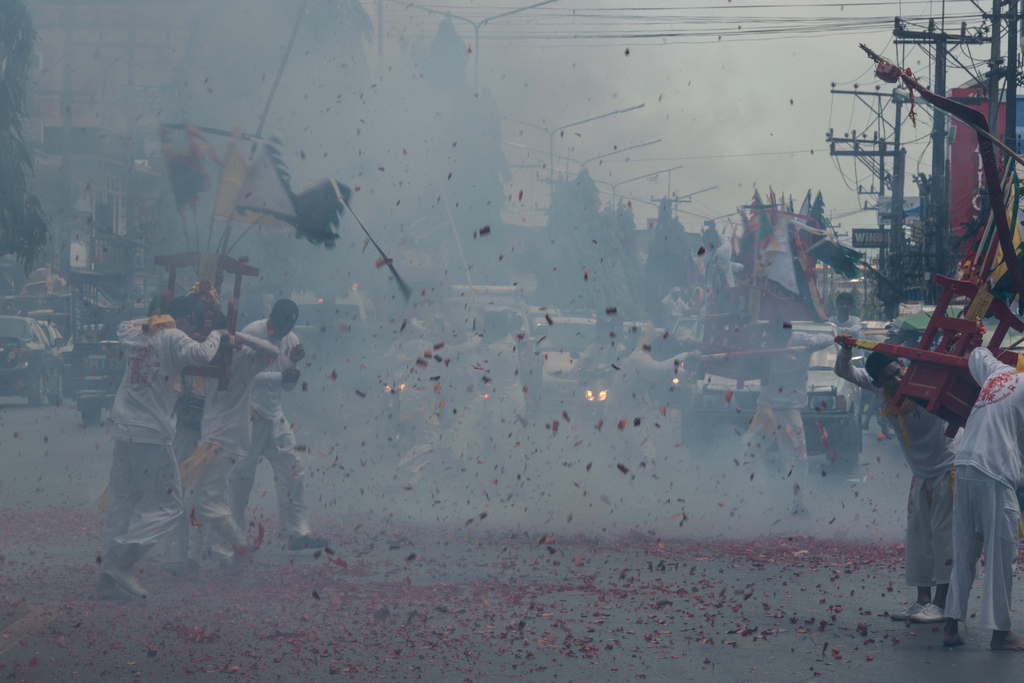 The parade didn’t so much end as disintegrate after two-and-a-half hours, when everyone was just too hot and tired to continue. The lead vehicles were making a U-turn on the main boulevard and, instead of following, the paraders surged across the median and then kept going, off the street and onto the shady sidewalk. I watched a fireworks display and blessing, and then a woman waved me into the back of a pick-up truck that was carrying a couple of palanquins carrying carved images. Trusting that she knew what to do with me, I scrambled in among the gods. I’d lost Karel, but all was well; it turned out that Jimmy was driving the truck. He brought me to his house near the temple, where I waited until my companions appeared. Kelvin was recruited to carry the palanquin for Jimmy’s fireworks display, and he continued on to a few more houses while the gods blessed us at Jimmy’s home. 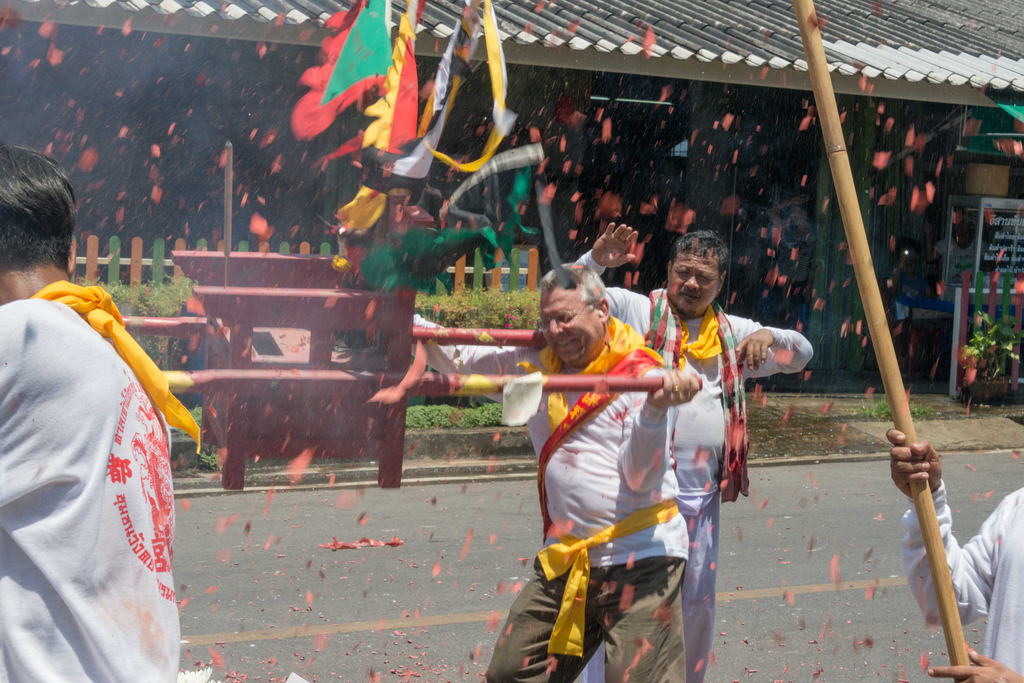 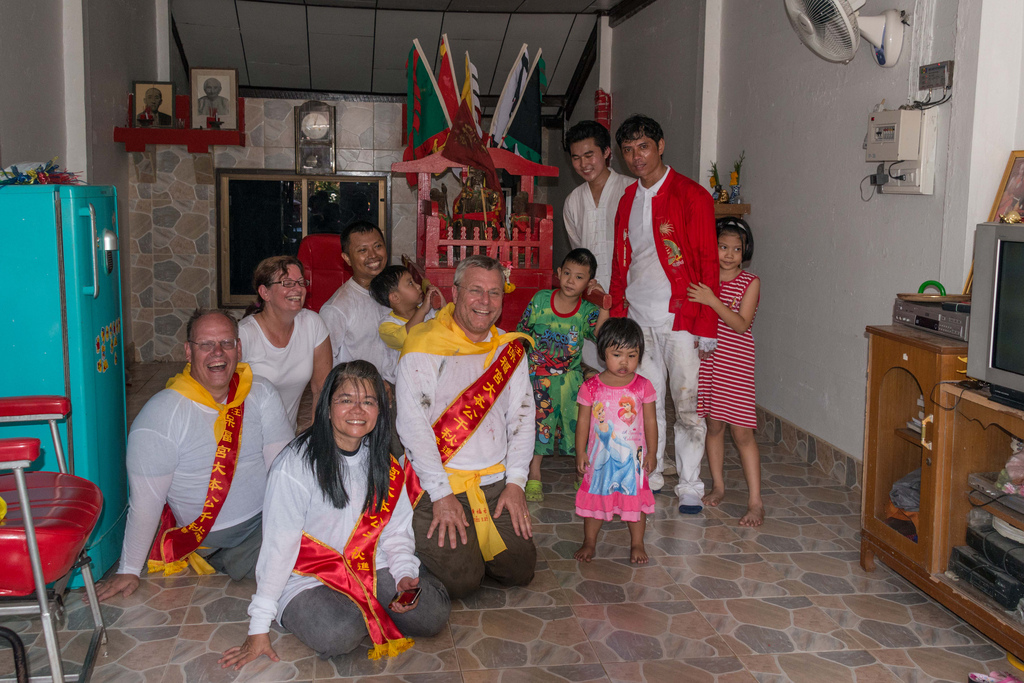 At last, we said our thank yous and farewells (after declining the gracious invitation to the feast in the afternoon and party and ceremonies that evening), and staggered off in search of a cool waterfall and drinks. Kelvin’s t-shirt was still smoldering from where some of the firecracker sparks had hit him. We were as bewildered as we were delighted.

“Well,” said Jaa, “how did you like my famous half-day walking tour of Trang?” 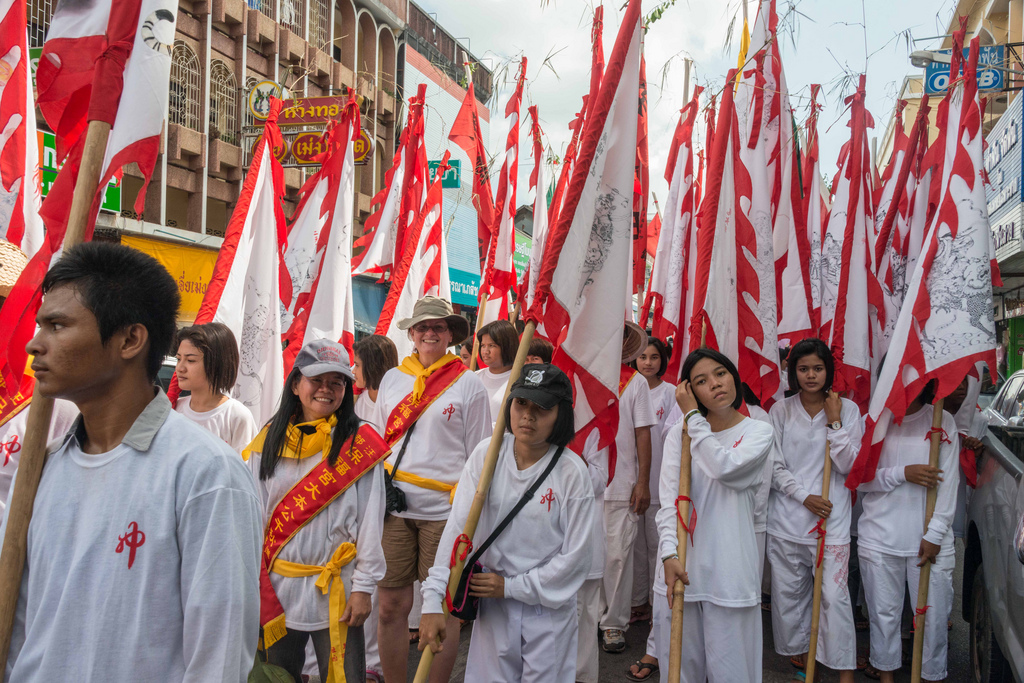