Karel has been to Japan, China, and Thailand before, but Bali is my first experience of Asia. When we left the serene confines of our resort—this time in daylight—every sight and sound and smell was a novelty to me.

You can read about Bali on Wikipedia, but here are a few factoids for context:
• Bali is a province of Indonesia.
• The main island is approximately 2,232 square miles (5,780 square kilometers).
• The topography is very mountainous, with a broad lowland to the south and a narrow band of coastal flats around the rest of the island.
• There are two active volcanoes near the center of the island.
• Although Indonesia has the largest Muslim population in the world, the vast majority of Balinese practice a form of Hinduism heavily influenced by Buddhism and the animistic beliefs of the earliest inhabitants of the island.
• The population of the small island is roughly 4 million, about half of whom are driving on the approximately 800 km of paved roads at any given moment (based on my own observations).

Our driver took us back through Denpasar to the town of Ubud, made famous by the book and movie, Eat, Pray, Love. Denpasar, at nearly half a million people, is big enough to have a couple of traffic lights. At the first one we came to, we had a rather longish wait, and the traffic just sort of piled up, willy nilly, at the intersection, with three lines of cars and five lines of motorcycles filling the two-lane roadway from edge to edge. When the light finally turned green, everyone honked their horn in celebration and sorted themselves quickly into the normal pattern, for Bali, of one to three vehicles abreast, per lane-and-a-half.

It wasn’t very far, perhaps 40 km, but it took nearly two hours. The scooters don’t go very fast, and it’s hard to pass them when traffic is heavy. The road was lined on each side with concrete workshops and retail stalls. They’re right up close to the road, with barely enough space to park a motorcycle in front, and they just seemed to go on endlessly, so I couldn’t see what was going on beyond a few meters to either side of the road.

The main road in Ubud was one-way and heavily congested, so we took half an hour or so to make a loop through town and stop at the entrance to our hotel – about 100 meters from where we first entered the city. We descended steps through a long passageway into the secret world behind the shops, a hillside complex that resembled the grounds of an ancient temple, down, down, down, through gateways defended by statues of fantastical creatures, into a beautiful landscape of pools and fountains, mossy stone walls, and a maze of pathways. 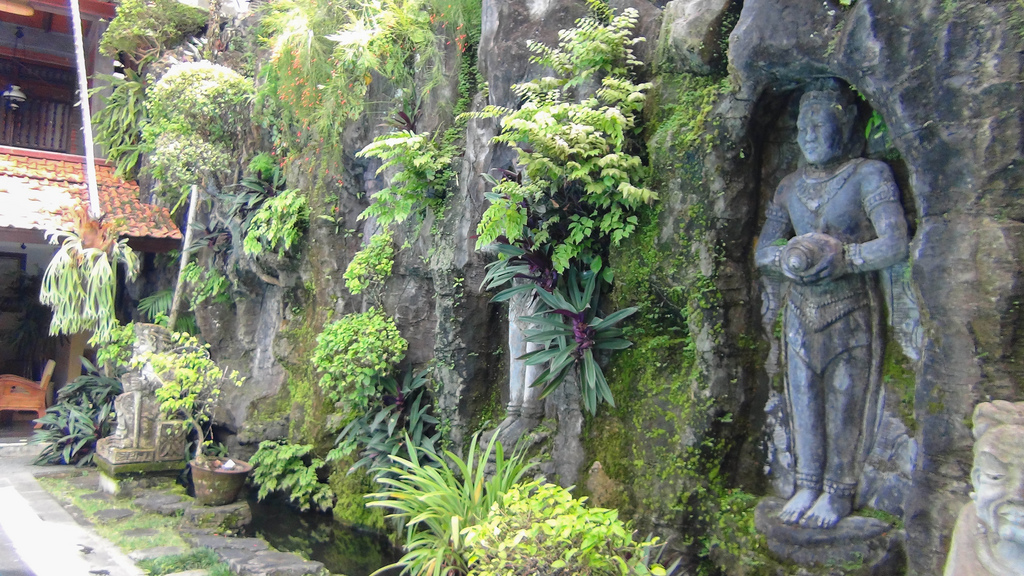 At last, we found the reception desk and were shown to our room, down even further, then up, up, so many steps and turns and mysterious little nooks and side-paths. This place was not designed with wheeled suitcases in mind. I noticed that everyone stayed on the paths, even when that wasn’t the most direct route, and they removed their sandals before helping us get the luggage into the room, which was simple and beautiful. There was a subtle formality to the whole process, and everything was carried out with a stately grace.

We settled in and Karel took a nap while I relaxed on our front porch for a while, drinking in the atmosphere. Ubud is higher than our resort in Nusa Dua, but still very warm and humid. It makes you feel sticky and lethargic, and any exertion caused our cold-adapted bodies to instantly overheat. Because of Karel’s sunburn, he was especially uncomfortable and needed to rest.

I roused him in time for our initial meeting with our tour director and five fellow travelers for the next week, followed by a short drive to a local night market.

I awoke at sunrise to the smell of incense and the sounds of rose-colored doves in the midst of their courting rituals (a lot of puffing and strutting). I enjoyed the slightly cooler air out on the porch before the sun cleared the hills and turned the day into another steam bath.

We explored Ubud, which turned out to be a very touristy town. We couldn’t walk 10 yards without being asked whether we needed a taxi. After a long morning walk outside Ubud, a taxi was tempting; we both were sticky and hot, and it takes intense concentration to navigate the uneven sidewalks. The distance wasn’t far, though, and we walked back to our hotel after a stop for some cool drinks.

Ah, yes, back to those toilet mysteries. At a restaurant pit stop, I found the bathroom dripping wet from floor to ceiling, apparently from the previous occupant’s experimentation with the spray nozzle. Note to readers: Try not to do stuff like that in public rest rooms. Our hotel room was equipped, however, so I took the opportunity to try it out, discreetly. I don’t know if this is the “proper” method, but it works: Remain Seated. No mess, very hygienic.

That evening we attended a Kecak dance (see http://en.wikipedia.org/wiki/Kecak). This dance is performed without musical instruments; instead, the performers use rhythmic chanting as accompaniment. It was a very interesting and unique experience.