It was dark when we arrived in Denpasar, but we could tell instantly that we were in another world. It was very warm, but not unbearably so; however, the humidity was around 90%. As we stepped out of the air-conditioned jet, we were instantly covered with a sheen of moisture, and we haven’t been dry since.

We had to purchase our visas, clear customs and immigration, etc., which all took a little while, so I took the opportunity to use the rest room before our journey to the hotel. For those of you who haven’t been to Asia and may be interested, they do things differently here, so I’ll give you a peek. First of all, the women’s rest room was very clean and adequately appointed for international travelers. There are two types of toilets: one for sitting, and one for squatting. A drawing on the outside of each stall lets you know what you’ll find inside. More diagrams inside the door provide helpful guidance about proper use of the facilities. There was also a spray nozzle (like the kind you have on a kitchen sink) and hose next to each toilet. Now, I can imagine what that might be for, but how you’d use it without making a big, wet mess of the stall is a mystery to me, and there were no instructive drawings. I’ll let you know if I figure it out.

Traffic on a four-lane highway (two each way) through Denpasar was moderate and consisted of about 50% scooters or small motorcycles, and the rest a mixture of cars, vans, trucks, and buses. According to our driver, who said to call him G’day (but I learned later that he was saying Gede, a common Balinese name), our half-hour drive would have taken three to four hours last week, when many Chinese tourists were on holiday for New Year’s celebrations. There was also a lot of roadwork going on; it looks like they’re adding drainage and conduit, and a second, parallel highway is also in the works. Sometimes we were down to a lane-and-a-half, but that was no problem for the Balinese traffic, which compressed, expanded, surged, and eddied like flowing water, without regard for painted lines on the road or other decorations.

Gede helped us pass the time by trying to teach me some words and phrases in Balinese (without much success, but I tried). Our hotel, the Ayodya (pronounced eye-yoh’-diah), is in a gated compound on a peninsula at the south end of the island. We bid G’day good night (I thought he’d roll his eyes at that one, but he actually seemed to think it was pretty funny), and ascended the steps into a grand palace of a resort.

Although Ayodya is a huge resort with all the amenities, it is also warm and friendly and full of character. Some of the staff have made a point of learning our names; they sent complimentary flowers, fruit, and wine to our room (a honeymoon gift) and have, in every way, bent over backwards to make us happy. The grounds and buildings are gorgeous, with timbered ceilings, carved wood, wood and tile floors, fountains, and so on. The open-air lobby is immense, and decorated with distinctively Balinese/Hindu-style statues of all kinds of people, including women with babies and elderly men and women. 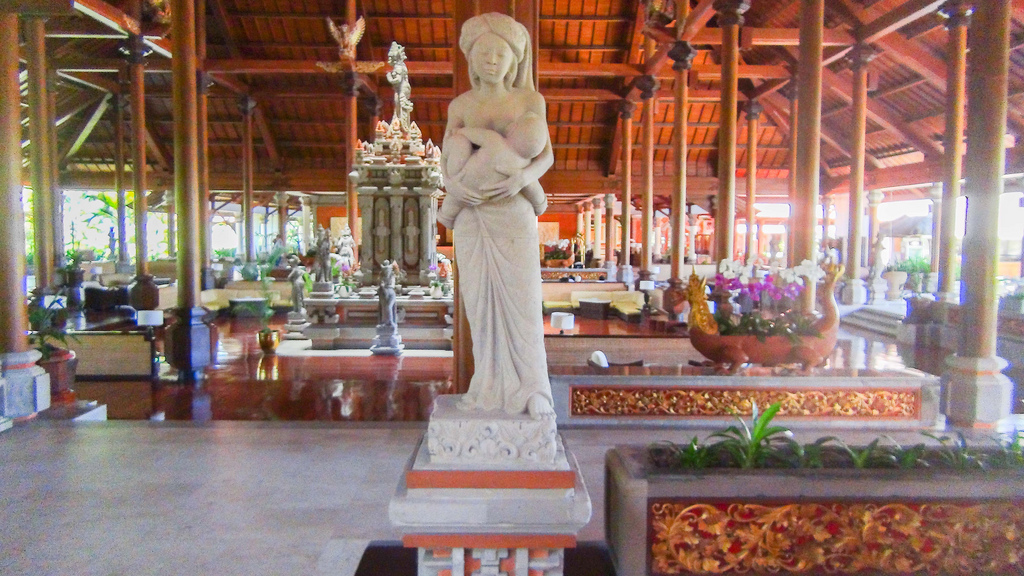 In the mornings, you’ll find tiny leaf baskets of flowers on the floors and counters, usually, it seems, near entrances or a particular statue; these are daily offerings to the gods placed there by the staff. The hotel and people are utterly charming and a very gentle introduction to a place that is very different from anywhere else I’ve ever been. Sorry we don’t have many photos to show you, but they just can’t capture it very well.

We were here for three nights of total relaxation, with absolutely no plans to go anywhere or do anything. The weather gods continued to smile; we where told that it rained and rained until a day or so before our arrival, but we had plenty of sunshine. During our stay, I got a Bali dance lesson (I couldn’t quite follow the many intricate dance movements, but it was a lot of fun.) Balinese children begin learning the traditional dances and music of their country starting at age six. Later, we attended a performance, and the tourists were invited on stage to do the friendship dance.

The resort also organized activities such as pool volleyball. Karel, who used to play volleyball in the distant past, enthusiastically joined the game and had lots of fun – but he ended up with a bad sunburn that bothered him for the rest of the Bali stay.