People living in Boulder often lament that Boulder would be absolutely perfect, if it only had a beach. If you want to see what that looks like, go to Queenstown, which is nestled between high mountains and one of New Zealand’s largest lake, named Wakatipu. Like Boulder, Queenstown is overrun with young and athletic types looking for adventure, but unlike Boulder, tourism is now the only game in town.

There are mobs of “backpackers” here—twenty-somethings traveling on the cheap. On warm evenings, they gather on the waterfront, sitting in tight circles, drinking and talking. After sunset they migrate into the 30 or so pubs and nightclubs that stay open all night. For those with a little cash, Queenstown offers plenty of excitement, including parasailing, kite sailing, bungee jumping, the canyon swing, jet boating, sky diving, etc., etc. In the winter, Queenstown is the premier destination for skiers and snowboarders from Australia, or those from the Northern Hemisphere suffering from withdrawal. 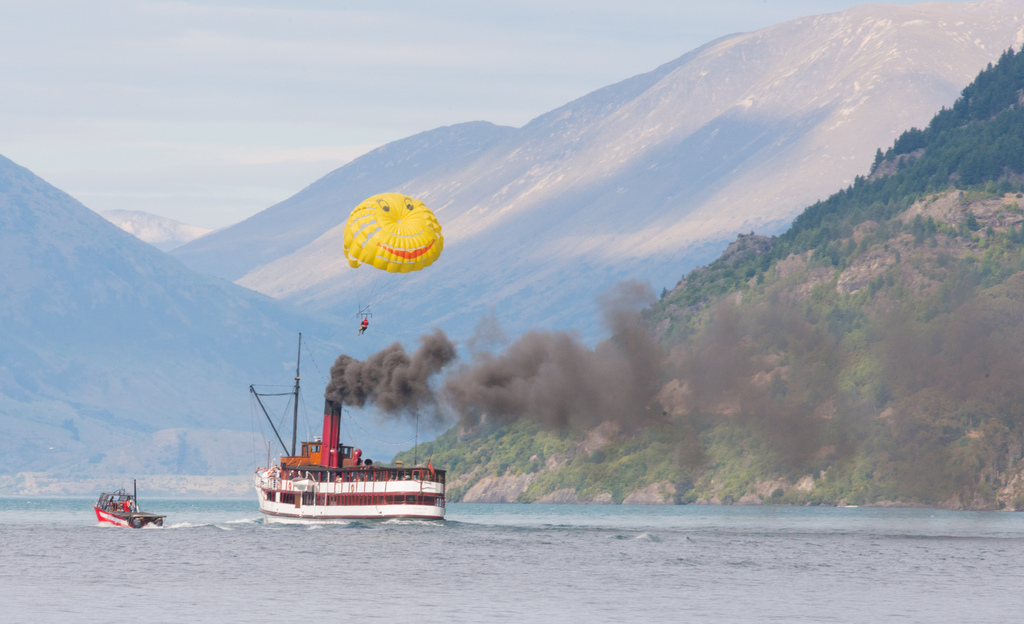 No sooner did we arrive and start meandering the streets looking for dinner, than we heard someone calling our names, and there were Djanisa and Rana again! They had arrived the day before. We shared our latest adventure stories and said farewell one last time. 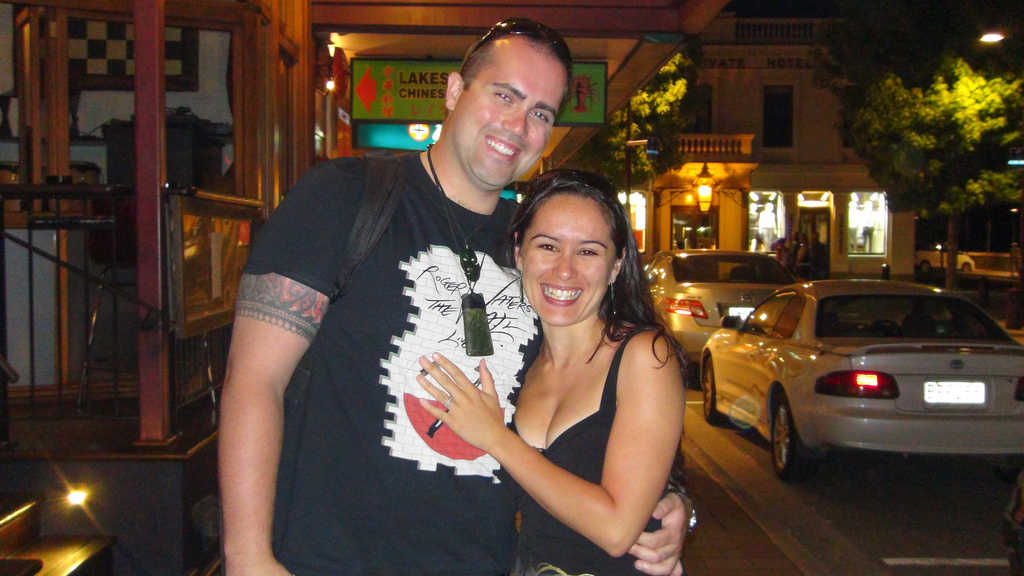 When we appeared in the hotel lobby early in the morning to meet our tour guide for a day-trip to famous, iconic Milford Sound, we were dismayed to find a huge coach bus waiting for us. We had specifically told our travel agent not to book us on this kind of tour. Oh, well, too late to change it now, and the itinerary looked good.

Or not. The seats were cramped and uncomfortable. Our promised refreshment stop in the lovely, lakeside village of Te Anau was basically a truck stop/tourist trap, away from the lakefront, with lousy coffee and incompetent service. Annoying.

Back onto the torture chamber for another leg of the four-hour journey. The scenery got better and better, which is really saying something. We were turned loose again for a 10-minute walk at a nice spot for taking pictures. 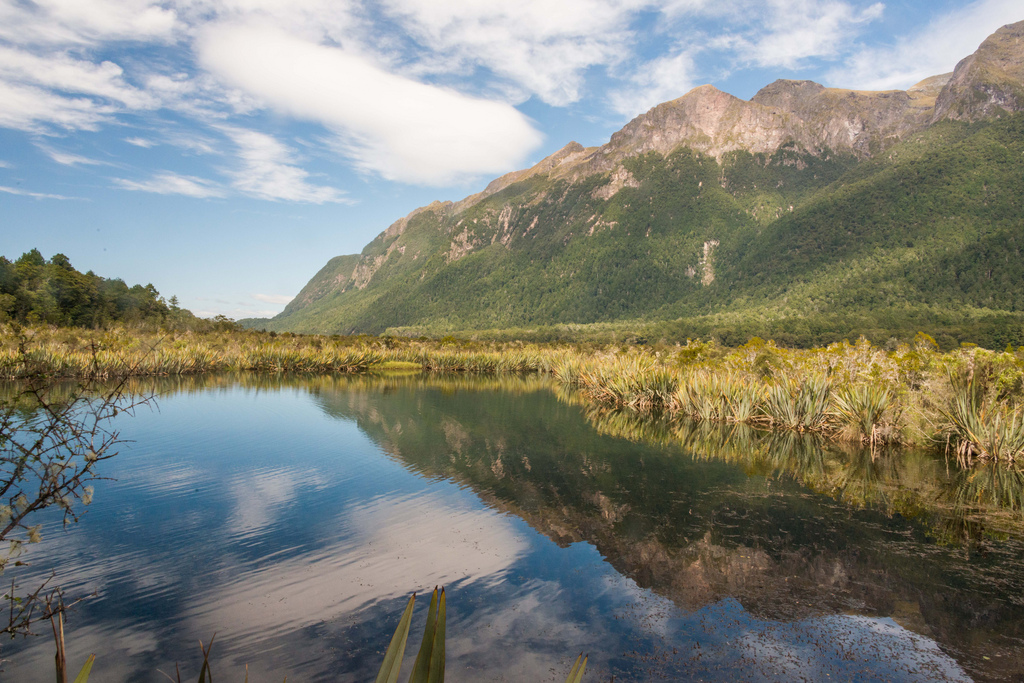 Back on. We stopped again, and this time there were two wild alpine parrots in the parking lot, showing off for the tourists. We were standing right next to our bus, taking pictures when, without warning, the bus pulled away, leaving (I’m not kidding) one quarter of the passengers behind. We had to go chasing it down the road until the driver noticed and pulled over. He scolded us for not sticking to the schedule. Off again for a short hike to a waterfall, with the admonishment not to waste time photographing any parrots. 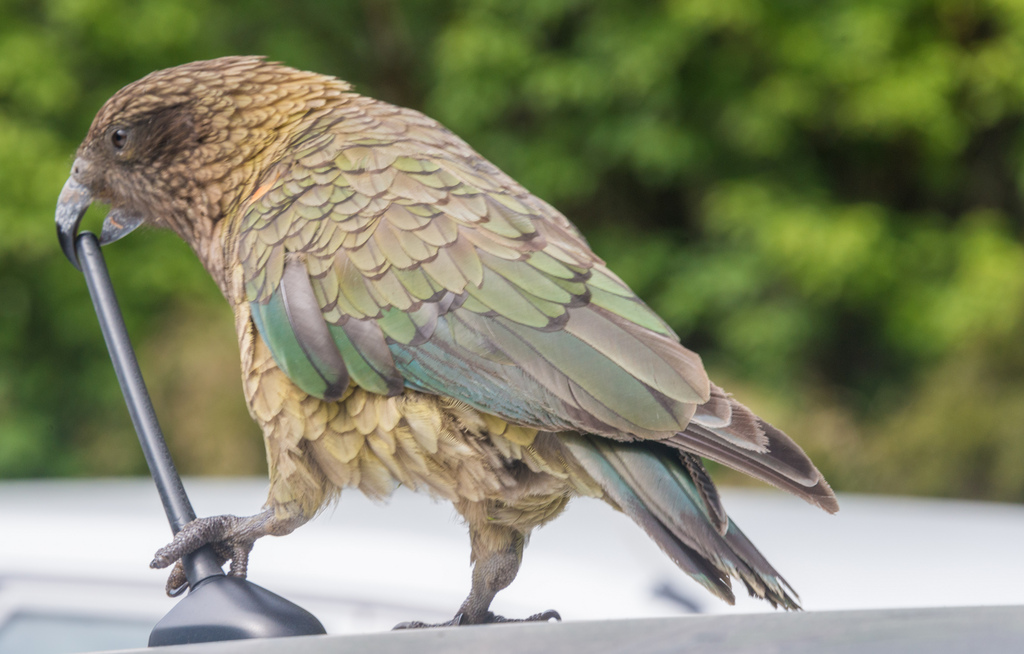 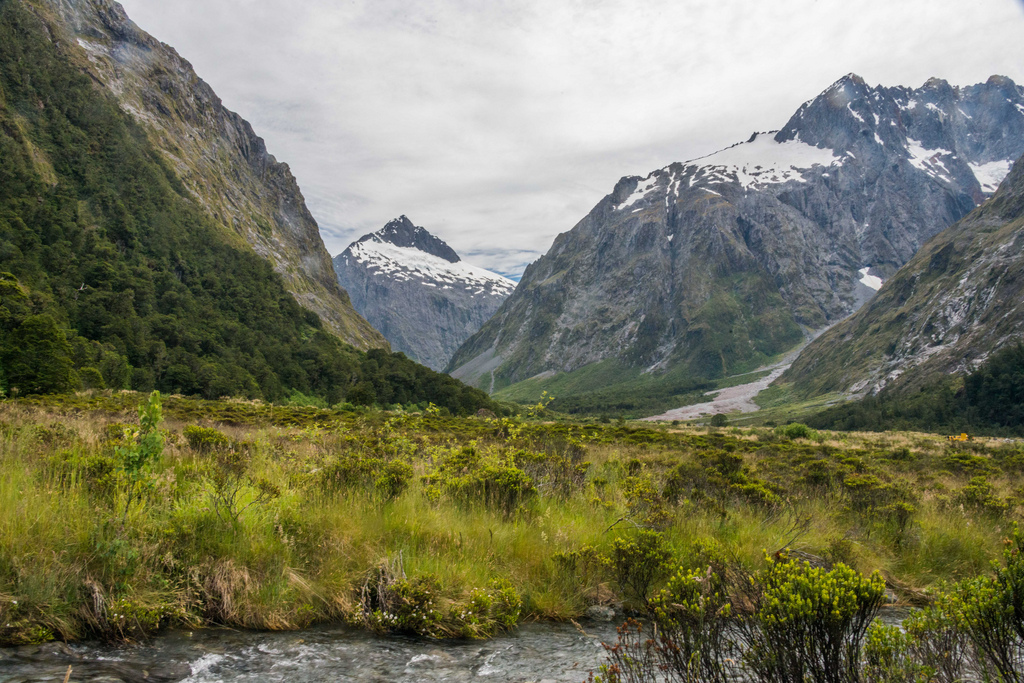 At last, we arrived at the sound and boarded a large boat. The scenery was fabulous. Rain was predicted, but the weather was kind to us, and the sun even peeked through the clouds now and then. However, Karel has been bragging that we bring good weather wherever we go. I warned him that the gods don’t like that kind of thing.

Too soon, the boat trip was over and we wedged ourselves back into the coach. The driver provided some excitement by tailgating anyone who might threaten the schedule and by having several near misses with two vans, a bicyclist, and a farm tractor. In all, we spent eight hours in that bus, and it was like being on an airplane (albeit with scenery out the windows), only worse.

Next day was better, with a smaller, more personal tour that included panning for gold (found nothing), visiting a few movie locations, and four-wheeling on some back-country roads. Later, I shopped for souvenirs and gifts while Karel worked on the photos.

Suddenly it was our last full day in New Zealand. Our travel agent had booked us onto a jet boat tour from the tiny village of Glenorchy, up the Dart River. My impression of jet boating, which we’d seen at a couple of lakes and waterfalls, is that it’s an amusement park ride, more about the adrenaline rush than a way to really see the country. That’s not my cup of tea, but I was game to go along with an open mind.

First, though, we had to get there. The jet boat company sent a bus to pick up the tourists at various hotels in Queenstown. Our driver, Stuart, was Maori, and entertained us with his version of the local history, geography, and socioeconomics. Every now and then, he’d slow down, open a window, and toss the daily newspaper into the driveways we passed. We frequently saw this kind of multi-tasking in New Zealand, where they make a point of using their resources efficiently. 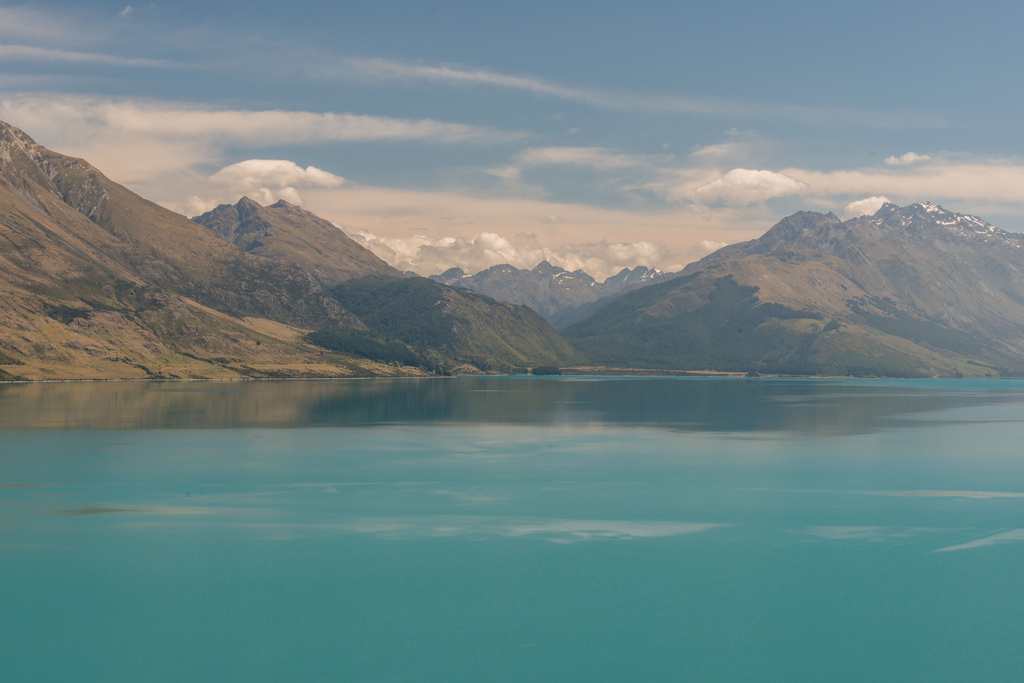 Jet boats are fast and powerful, so they’re great for traveling upstream in a strong current. They also can handle very shallow water—less than four inches—and can easily maneuver in tight spaces. This makes them perfect for braided, glacier-fed rivers such as the Dart.

We sped into some of the most breathtaking scenery I’ve ever seen. The boat took us far up the river at exhilarating speed, with new vistas opening up around each bend. There was a dust storm in progress—the price you pay for several days of dry, sunny weather around here—but that only added to the wildness of the scenery as we watched mica-filled whirlwinds blowing by. In the open boat, we had a raw and intimate connection with the grandeur all around us.

The only gratuitous (i.e., just for fun) maneuvers were a couple of 360s. I managed to get the video of one of those, and of course, the amazing views in every direction.

I think the only other way to experience the scenery along the Dart River that might, possibly, be even better would be to do it by kayak. But if you don’t have several days to paddle and camp, a jet boat is the way to go.