Rafting on the Tongariro river

We just wrapped up a few days of adventure in the vicinity of Taupo and Tongariro National Park. Our first stop was at the impressive Huka Falls.

Lake Taupo is New Zealand’s largest lake. At 616 square kilometers, it could swallow the entire nation of Singapore. 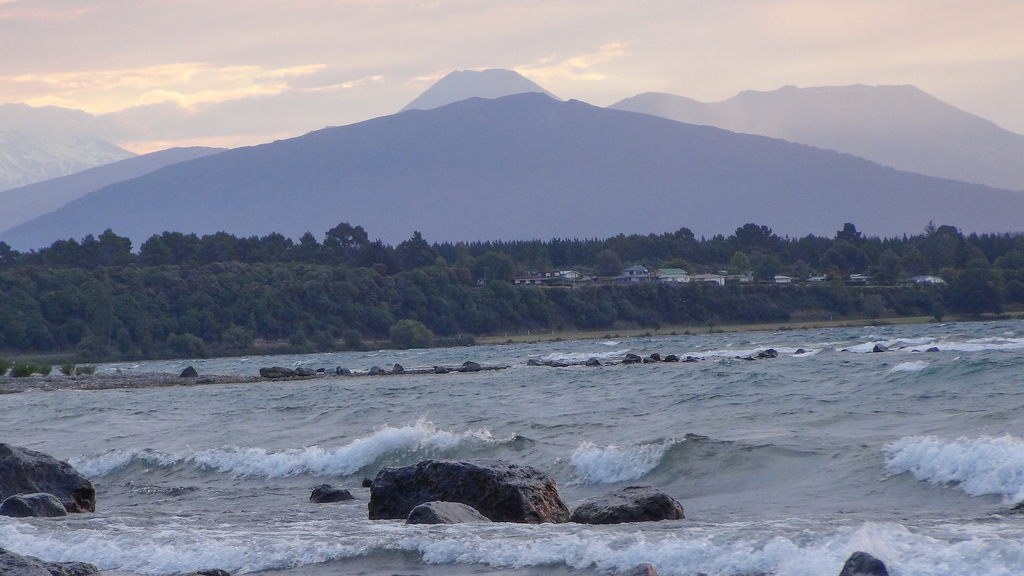 There are several large volcanoes around the lake, some of which are currently active. But the biggest volcano is the one in the foreground—the lake itself. It surely qualifies as a super-volcano, similar to the Yellowstone region. When Taupo Volcano erupted in 186 AD, it ejected more ash and rock than the eruptions of Krakatoa and Mount St. Helens combined, and blackened the skies over China for five months. The volcano is now considered dormant, and the huge crater lake that resulted is New Zealand’s premier action playground, with sky-diving topping the list of things to do here.

We opted for something a bit more mellow, but still a rush: white water rafting on the Tongariro River. The Tongariro is considered one of the premier fly fishing streams in the world. The stretch we were on winds through 20 km of narrow gorge. We enjoyed 60 rapids, up to grade 3, on a two-hour float—that’s one rapid every other minute, folks, practically a rollercoaster! A few of them were big enough to flip the raft, but we managed it all very handily. There were even a couple of stops for jumping off the rocks and swimming in the deep, beautiful pools. One of the rafters amazed us by running down the center of the raft into a back flip off the bow. They let you do stuff like that on guided tours in New Zealand.

After that we drove to Tongariro National Park by the light of a breathtaking sunset.

It was Karel’s turn to deal with a bit of queasiness and fatigue, so we put him to bed early while I prepared for a big hike on the following day.