We zigged back over to the east coast to spend a couple of days in the town of Napier, the Art Deco capitol of the world.

The entire business district was destroyed by an earthquake in 1931, and was rebuilt in that stylish mode over the next few years. They had a lot of new real estate to work with, as the earthquake shoved the shoreline up about 2.8 meters (nearly 9 feet)! Our bayside hotel was situated next to a bluff which used to be an island before the disaster.

Napier is at the heart of the Hawke’s Bay wine-growing region, so we spent a lovely afternoon touring wineries and sampling the outstanding wines. The climate here is similar to the Mediterranean, so they also grow olives.

Our fellow tourists were a couple from Brisbane, Australia. Rana is a man of Maori descent, while Djanisa is half Malaysian, half Aussie, or “Maussie.” We had a very interesting conversation about Maori culture and history that filled in a lot of the missing pieces from what we had learned during our introduction to Maori traditions.

Rana is in the first generation to grow up during the Maori renaissance. Although he was born and raised in Australia, he has strong ties to his family and heritage in New Zealand. He knows the language and follows the customs, including the moko, the striking tattoos the Maori are known for. The tattoos are full of lore and symbolism that connect Rana with his family, the land, and his ancestors. As an example, one of Rana’s ancestors learned how to use spiderwebs to close and protect wounds. This medical innovation is something that Rana has incorporated this in his moko, using a design that symbolizes the spiderweb. 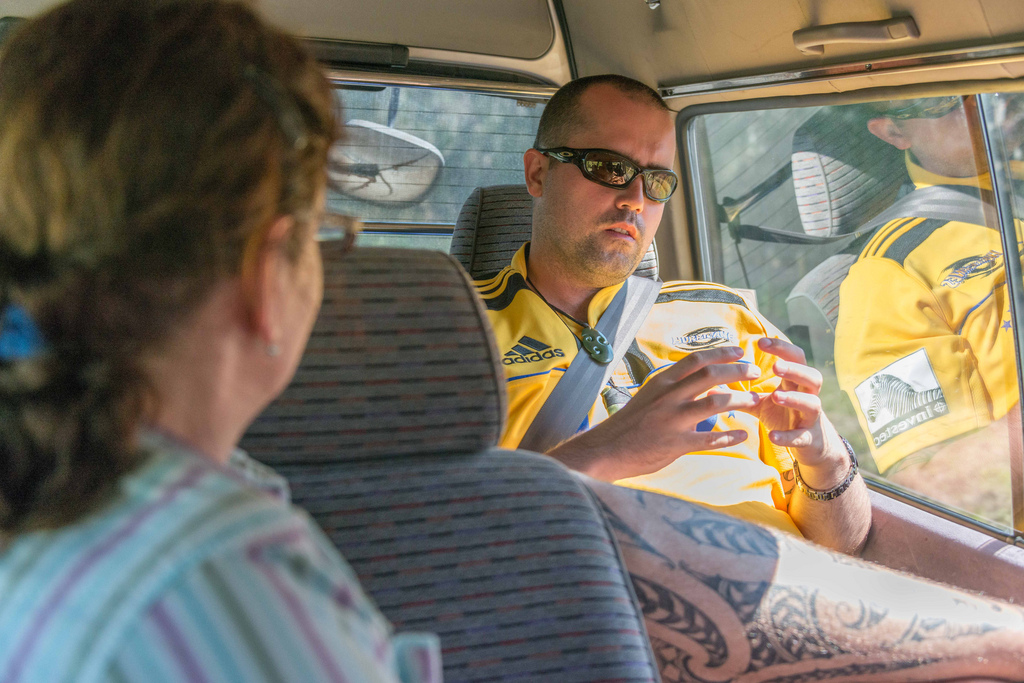 During the work week, Rana wears an oxford and tie and has a responsible position in transportation telecommunications, but on his own time his tank top and rugby shorts reveal his tribal heritage. This can be a challenge in Australia, where people are less familiar with the purpose of the moko. Rana (who is a large guy with an athletic build) told us that people often cross the street to avoid getting too close.

The dark side of Maori heritage is that they were a warlike people who enslaved and cannibalized their enemies. New Zealand had many resources, but lacked mammals for meat. The geothermal pools that made life so much easier were coveted by rival tribes, and some of the necessities of life could only be made through labor-intensive processes. Interesting tidbit: Rana told us that New Zealand was already occupied by humans when the Maori arrived, but these folk were driven to extinction by the fierce Maori. I tried to find out more about this later. There are several theories about earlier settlers, but so far no conclusive evidence. Nevertheless, if there were people here before, it’s not hard to believe that they were wiped out and/or assimilated by the Maori.

It’s so interesting to be in New Zealand about 30 to 40 years into the nation’s effort to merge two cultures. America experienced a similar awakening and re-examining of its history and indigenous peoples about 40 years ago, but with different results. Maori comprise about 10% of the population here. We sometimes hear the language being spoken on the street, and the country seems to be reverting more and more to the Maori place names. Also, there are clearly efforts being made to rectify past injustices, such as old treaties involving sovereignty, signed at a time when the Maori had no concept of empires and queens. I’m sure this can’t be easy. The white Kiwis we’ve met seem to be a kind and open-minded people who are willing to bend over backwards to do what’s right. However, it’s one thing to agree with the ideals of fairness, multiculturalism, and restitution, and quite another to give up your own rights and property to make amends for things that happened before you were born.